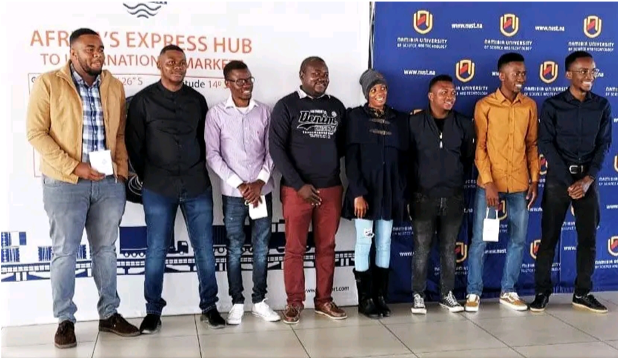 Ports Authority (Namport) through the Namport Social Investment Fund (NSIF) has recently awarded a N$1,5 million scholarship to nineteen students from the Namibian University of Science and Technology (NUST).

The Chairperson of the NSIF Ms. Tana Pesant said that Namport through our social investment arm, the NSIF, whose areas of focus include investment in quality education, has been engaging NUST with the view to fund the Namport endowed chair for the faculty of logistics and transport.

“It has been our considered position that this would provide an appropriate foundation for setting up a competent pipeline for the supply of much-needed logistics and transport experts for our country.”

Pesant explained that through their continued engagements and collaboration with NUST they became aware of the need for marine engineering students to travel to Finland for their studies as part of their marine engineering degree program with NUST and Satakunta University of Applied Sciences (SAMK).

NUST vice chancellor Dr. Erold Naomab said through a survey conducted by the institution, they saw a need to train marine engineers to locally maximize the exportation of marine resources in Namibia.

NUST student representative Werner Angula said: “We, the marine students would like to thank the Namport team for the sponsorship to complete our studies in Finland.”