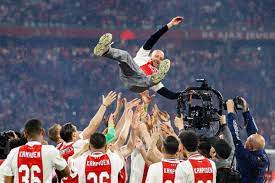 Erik Ten Hag won his third Eredivisie title with Ajax on Wednesday evening as his side won 5-0 against Heerenveen at the Johan Cruyff Arena retaining the title they won last year.

Ten Hag will be joining English giants Manchester United on 1 July 2022 until June 2022 with an option of extending his contract for another year. Hag was officially appointed as manager for Manchester United on 21 April as interim manager Ralph Ragnick will be relieved from his role.

Ten Hag joined Ajax on 21 December 2017 as head coach and led Ajax to the first semi-finals for the first time since 1979 . He became the fastest manager in history of the dutch league to reach one hundred wins after his side beat Utrecht 3-0 away on matchday 19.