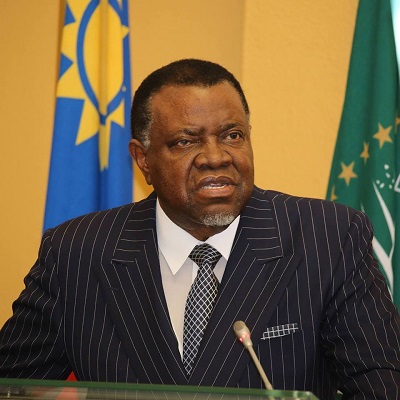 His Excellency Dr. Hage G. Geingob joins Namibians in memory of the hundreds of Namibians refugees and freedom fighters who died in the barbaric attack by the notorious colonial troops of apartheid South Africa at Cassinga in Southern Angola.
In his message, shared on the Namibian Presidency Facebook page, Geingob said:
“Cassinga Day will forever be a scar in the memory of Namibians. Today, forty four (44) years after the brutal, senseless and inhumane massacre of Namibian refugees mainly women and children, on 4 May 1978, at Cassinga in Southern Angola. We still remember that painful chapter because the physical and psychological scars are deep and they remain a constant reminder that the freedom and independence of the Namibian people came at a high cost.
On this solemn day, we pause to remember our compatriots who lost their previous lives on that fateful day, May 4, 1978, on which horrific acts of violence and brutality were committed against the Namibian people. We will remember forever.
We also page homage to the survivors of the Cassinga Massacre, whose lives remains traumatized by the events of that fateful day. A day of memory, Cassinga Day should continue to remind Namibians about the selfless sacrifices made by thousands of our countrymen and women in the cause of the struggle for the independence of our motherland.
It is therefore our duty to ensure that the dreams, aspiration and blood of those sons and daughters of Namibia who laid down their lives so that we can enjoy our freedom today are betrayed.
Therefore the most befitting manner in which we can honour the memory of Cassinga Day and sacrifices of our heroes and heroines is by working hard, in unity towards the realization of a better Namibia, guided by the principles of social justice, solidarity and improvement of the standard of living of our people.
Let us therefore engage, as a collective, in action that gives deserving respect to those who lost their lives for the freedom on independence of our country.
In memory of the 44th anniversary of the Cassinga Massacre, I urge all Namibians to forge ahead with the task of nation- building. Let us pull together in the same direction to build a united and prosperous Namibia for present and future generations of the country.
Long live the memory of Cassinga Day!
Long live the Republic of Namibia.”
In his closing remarks Geingob said that, Cassinga was a Reception Centre for Namibian refugees who were fleeing the country into Angola to join the armed struggle for the liberation of their motherland.