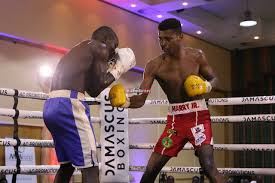 Welterweight pugilist Harry Simon Junior’s victoriously triumphed against Tsiko Mulovhedzi of South Africa has incentivized him to probe for more fights outside the borders of Namibia.

The 25-year-old Simon Jr, who vanquished 35-year-old former SA welterweight champion Mulovhedzi through a unanimous decision at the international welterweight eight-rounder fight in the Lehlohonolo Ledwaba Memorial tournament, held on 31 July at the Dlamini Hall in Soweto, verbally expressed the fight has opened up more opportunities for him.