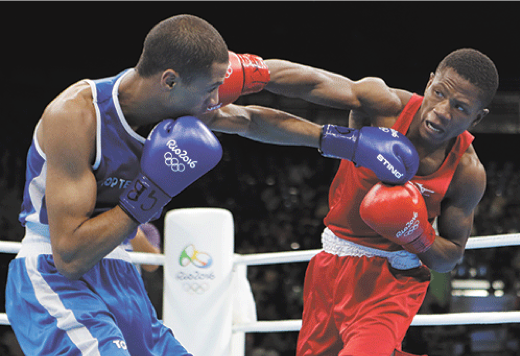 Caleb offered little resistance and towards the end of the round Jonas trapped him in a corner, and after landing two powerful right hooks in quick succession the referee stepped in to give Caleb a mandatory eight-second count.

After the count the referee decided that Caleb had had enough and called an end to the fight.  It was a great start for Jonas who won a gold medal at the previous Commonwealth Games at the Gold Coast and will now be aiming to make it two in a row.  In the Men’s Triathlon, Divan du Plooy came 25th out of 44 athletes who completed the race.

Against Wales the Namibians started on the offensive, building up a 5-1 lead and then streaking ahead to 9-4 by the ninth end.  Namibia pulled back to draw level at 12-12 by the 16th end but Wales regained the lead to win the match 16-14 after the 18th end.  In their second match, Jamaica took an early 3-0 lead but Namibia soon drew level and by the 5th end were leading 6-3.