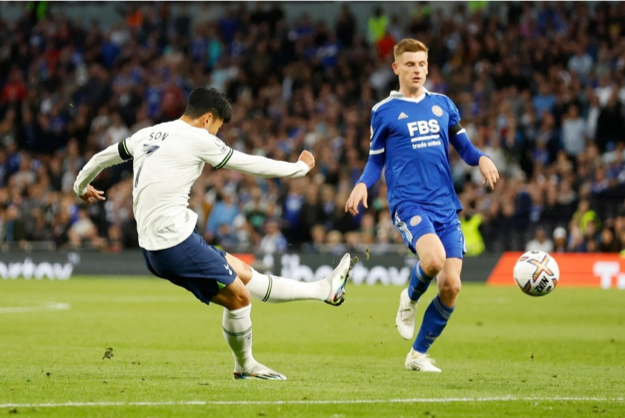 Heung-Min Son comes from the bench and seals a hat-trick with an outstanding finish in Tottenham’s 6-2 win thrilling match against Leicester City on Saturday evening.

Son hasn’t lived up to his top-level this campaign and found himself dropped to the bench by Antonio Conte. Despite having a poor start this season, the forward capped himself with a superb hat-trick from the bench and left fans shocked.

Son was introduced in the match after the break replacing Richarlison.  He found Tottenham leading and already looking comfortable, but Son made sure they grab all three points with wonderfully taken efforts and sends Tottenham second on the table.

He found his first goal in the 73 minutes and 7 minutes later hit the back of the net again after picking up  Harry Kane’s feed and firing a stunning curve off the left post leaving  Leicester City goalkeeper with no chance before he completed his hat-trick three minutes later.

The South Korean forward ends his goal drought after he failed to find the back of the net in eight games. The forward was warned by the manager for his sub-par performance this season.

Son who won his first Premier League Golden Boot last season with 23 goals leveling with Liverpool’s Mo Salah at the top of the table, has now registered only three goals and a single assist in his campaign.