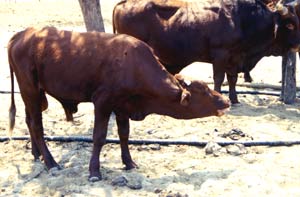 FARMERS should take note of limitations after an outbreak of lung sickness, which has been discovered at the Oshandi crush pen in the Ondobe Constituency of Ohangwena.

The Ministry of Agriculture, Water and Land Reform in a statement said a number of roadblocks will be put up at strategic points, and members of the public are urged to fully cooperate with the veterinary and police officials.

Surveillance teams have been placed in the region to start the extent of the outbreak and farmers are requested to cooperate and present their livestock for inspection.

Vaccination of all cattle at risk against lung sickness is underway and all farmers are strongly urged to present their cattle for vaccination at their respective crush pens.

Lung sickness was confirmed by the Windhoek Central Veterinary Laboratory on 31 May 2022.

In line with the Animal Health Act (Act l of 2011), the following control measures are put in place with immediate effect:

A complete movement restriction/ ban of live cattle (except for direct slaughter) within, in and out of the Ondobe constituency with immediate effect until further notice.

The following are permitted:

Movement of cattle for direct slaughter within the constituency provided that they move under an official movement permit and get slaughtered within 72 hours under veterinary supervision.

These cattle should not come in close contact with cattle not meant for slaughter at the place of destination.

Movement of cattle meat and other products except for lungs, within and out of the constituency.

Movement of cattle for direct slaughter outside the constituency provided that they are slaughtered at abattoirs under official veterinary control.

Movement of live sheep, goats, pigs and other animals (except live cattle) and their products.

Transmission and spread of lung sickness:

Transmission of the disease occurs through direct contact between an infected and a susceptible animal through inhaling droplets disseminated by coughing.

Chronically infected cattle carry and spread the disease without showing signs of illness for longer periods.

Lung sickness is mostly a disease in cattle and water buffalo caused by Mycoplasma mycoides, a type of bacteria that attacks the lungs of susceptible animals.

In Africa, lung sickness is known to cause greater losses of cattle than any other disease as it may result in a death rate of more than 50%.

Humans are not in danger of lung sickness, therefore there is no public health risk