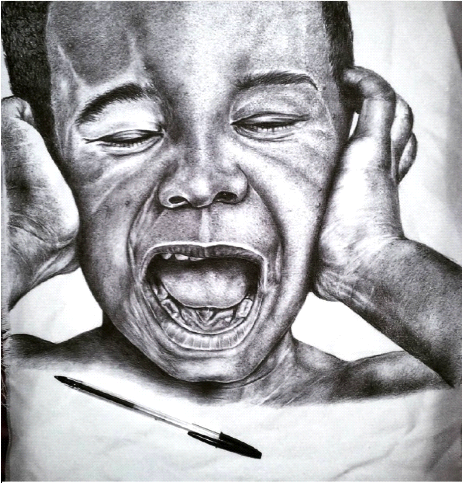 George M. Eduard is a Namibian artist specialized in 2D art which includes mixed media art, drawing, and painting . George studied art at the college of Art since 2013-2015, and graduated in 2016.

George’s words’ ’in my community there are some very poor and neglected children who I see every day. I feel great pity for them and often I try and help them with whatever I have. I wonder what can be done to help these children, not individually, but to try and get rid of poverty. Poverty affects us all, it creates fears and unhappiness and it stops development.

His theme is based on the children with poverty but mostly focus on poor children in Oshakati(Ompungu). The artwork is explored in 2D mixed media artworks and the medium that choose are found materials such as fabrics, paper, and paints. He combined them to make portraits of these children.

Creative methodologies in terms of materials, medium, and technique

In terms of the techniques he has used to create these portraits, mixed media collage has been explored. Charcoal, pen, paint, fabric, and paper have been used to create these artworks. Rough and smooth areas create different textures in the artworks to enhance parts of the work and to create an interesting surface area. Found materials are combined together to create artworks that reflect poverty, mediums such as fabrics, paper, and acrylic paints are used to support areas of the painting to portray the image of children who are victimized by poverty.

He has taken photographs of these children, as well as researching images from the internet and newspapers, from that he draws different faces of children and makes them sad and often angry, He makes their eyes look dull, to show how the eyes of people in poverty look like because when a child is angry it shows in their eyes, he drew portraits of children and dressed them with scraps of fabric to symbolize that clothes are part of their needs. He also used paper in his artwork to represent education because poor people are victims of their lack of education.

He is inspired by two African artists, both known for their mixed media art. Their concepts empowered his theme and strengthened his research as they all focus on social issues. The artist that inspired him is Benon Lutaaya from South Africa and Berry Bickle from Zimbabwe. They are both well-known for making mixed media art.

His artworks will be displayed on the wall because they are all 2D mixed media artworks. I want people to view them, and look at them as we end suffering by means of sharing ideas on how to defeat poverty

George said what motivates him is meeting deadlines, targets, or goals, mentoring and coaching others, learning new things, coming up with creative ideas to improve some things, and working well as a team.