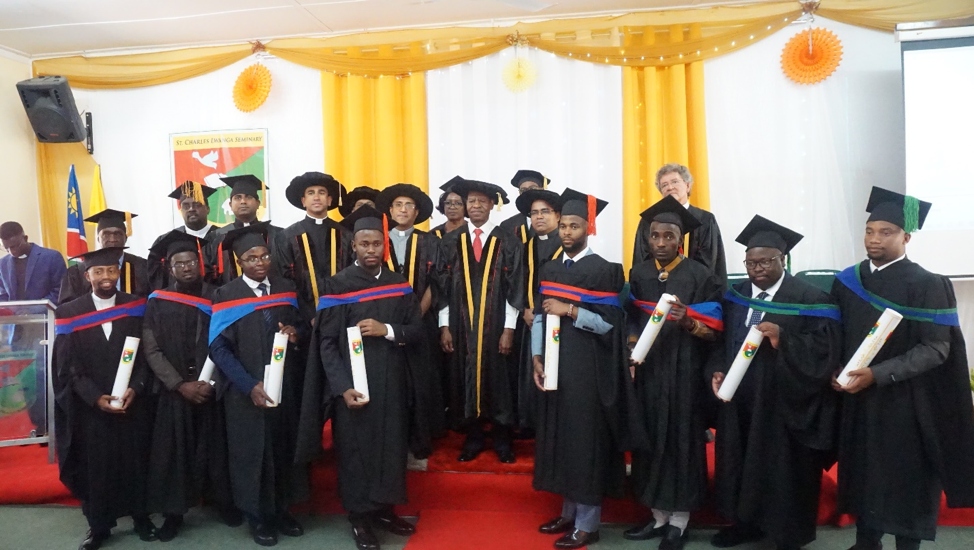 Jeronimo Kateya
Twelve students have received their qualifications on Friday the 25 November at the St. Charles Lwanga Major Seminary in the capital city, Windhoek, under the theme: Seek justice and righteousness in the modern world.

Similarly, two graduates received their Diplomas from the Faculty of Philosophy while the remaining four students from Kenya received their philosophy degrees in absentia.

“These four students that have received their qualifications in absentia are from the faculty of philosophy. They are CMI Scholastics from Kenya,” the Rector of the Seminary, Dr. Thaliath Taiju said.

Taiju pointed out that amongst the graduates, some are Namibians, others are from South Africa and Kenya. The seminary is an international institution that has in the past trained other students from other countries such as Angola, Botswana, Zambia, India, Burundi etc.

The graduation ceremony was principally graced by the presence of the keynote speaker, Chief Justice of the Supreme Court of the Republic of Namibia, Peter Shivute.

Shivute urged the graduates to remain human and humble when executing their pastoral ministries.

“Be human when you are exercising your pastoral work and avoid being ‘philosophical’ and be humble in a human way to listen to the people of God,” he said.

Besides, Katombela Fredrich a philosophy graduate could not contain his joy when asked how he feels to have a Philosophy degree.

“Of course I’m very much excited. Filled with Joy and happiness. This bachelor indicates to me that at least I have traveled a little further,” Fredrich said.

“My message to the Juniors is that, success is not granted unless hardworking need to pay off. Philosophy is the faculty that one should enjoy and bear the fruit of prudence, critical thinking and morality,” he said.

The seminary is equally registered and recognized by the National Council for Higher Education, (NCHE).

Consequently, the State approves the Diploma and Bachelor’s Degree in Theology as well as in Philosophy that the Seminary offers.

The place where young Catholics are trained for priesthood is known as Seminary. Seminary, thus, is a registered private higher education institution run by the Catholic Church for educating and preparing men to be priests.

The study programme of the Seminary has three stages namely stage one which is Orientation. This first year is an year for discernment, a time to know more about one’s call to diocesan priesthood and also to acquire various skills in Prayer, Communication and English

Stage two is Philosophy which has two years of academic training. This stage will lead one to more maturity. It will help one to understand more about one’s vocation to priesthood. It will give a good understanding of Human Person, of the World and of God. By using different tools of Philosophy one will be trained to use reason and slowly start seeing things with a reflective and critical mind.

The final stage is Theology which trains a candidate for four years. In this stage the students are matured enough to take a decision on their future life. Apart from acquiring a deep knowledge of the Bible and Church teaching, here they concentrate more on their future ministry, grow more in spiritual life, develop pastoral interest and various skills needed for various ministries in the parish.

St. Charles Lwanga Major Seminary was founded in 1997 with Rev. Dr. Fr Thomas Manninezhath being the first rector in 1998. While the vision of the institution is self-transformation of the learners into agents of social transformation and assisting them to be catalysts of growth and change in the society and thus become the “light of the world and the salt of the earth” (Mt 5:13-14), their mission is to empower and equip Namibian Catholic Church with qualified, committed and faithful priests and spiritual leaders, well-versed in catholic doctrines and skilled in practical ministry and to form quality leaders in the Namibian society who can guide people in varied walks of life through their philosophical and theological learning.

This would mean empowering people through philosophical and theological enquiry and learning based on Catholic tradition, yet in a living and creative dialogue with other religious and cultural traditions.